The Honey Show for the 79th year was held in the Rake Village Hall. Last year it was not possible to hold the Honey Show due to the restrictions and for the protection of our members.  It was decided that, due to the uncertainty of holding a Honey Show this year, an informal show should be created for members only.  This was mainly to keep numbers to a reasonable level.  Many members unfortunately still stayed away but perhaps they had taken a late holiday; this was despite the Honey Show being held as a social event for members to call in at any time of the day, for tea and cake (which was free). 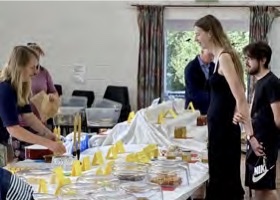 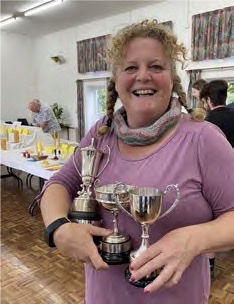 The Show classes were revised this year
and the open and members classes were integrated.  In many cases these were duplicated, mainly in the honey classes. The main reason was to provide a more open show and simplify entries. In the past members have entered both the members and the open classes. In fact, for the last few years there have been no entries into the open classes by non-members.

Instead of judging the display and photographic classes this year all visitors were invited to select their preferences in each class, which were then collated to establish the winner. There was also a forage class in which members were invited to create a display of forage with their common and Latin names, disappointingly there were only two entries. This was rather surprising as most beekeepers are interested in the plants around their apiaries. Another new class was a drawing of a bee with all the named external parts. Again, there were only two entries. Does this mean that beekeepers are not interested in the beautiful creatures that make up their colonies and provide honey to put on their toast for breakfast?

Another new class was introduced this year for other hive products to included polish, lip balm, hand cleanser and wax wraps. This attracted a good number of entries. A reason to include these new classes was because not all members have honey and there is a growing interest in these other hive products which are included in the National Honey Show.

Most beekeepers will have noticed earlier in the summer that the honey crop was going to be small. It was not however anticipated that a large number of colonies would in fact have
little or no honey, except minimal amounts for the colony’s day to day survival. Earlier in the season the Queens’ laying rate was reduced and some colonies started to regress.

This meant summer feeding,  something which is almost unknown. But if you wanted your colonies to survive this was In many cases the only option. We did of course check that exhibitors were entering Honey and not sugar syrup. The result was that the number of entries into the Honey classes was considerably reduced to less than 25% of the number of entries in the 2019 Honey Show.

Although we had planned the Honey Show it was always uncertain whether it could be held, which made it difficult to plan to far ahead and book Judges. It was decided to hold an in-house event. 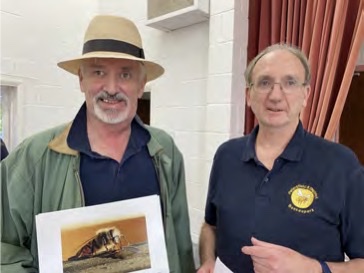 In the address given by Tom Blackburn (Association President) at the presentations he considered that the judging had been professionally undertaken and equal to any Honey Show Judge. 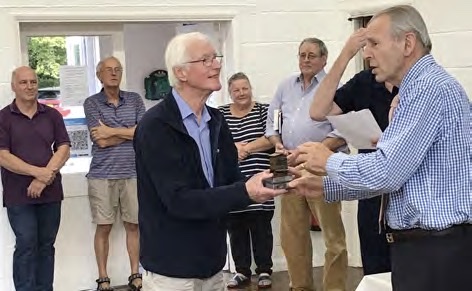 The judging was divided into categories and judged by members that had the requisite knowledge to judge the category and they were as follows:

Ali Hollingbery and Hilary Hayward were the Honey Stewards

Elizabeth Eveleigh and Martin Smythe were the Scorers and Record Keepers.

Dean Gregory and Chris Clark with other members set up and cleared the hall for the Show.

Anne-Chantal Ballard – provided the floral displays around the hall.

It was a good team effort, and I am grateful to all those people involved who made this possible and an enjoyable occasion. 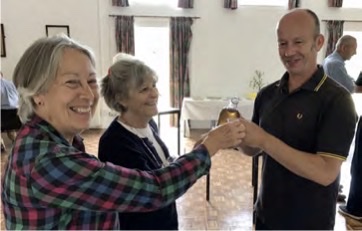 It was disappointing that only 16 members (21 in 2019) entered the Show out of a membership of 180 members. Especially as the classes covered a wider number of classes to accommodate for a poor honey crop. The number of classes had been reduced to 36 classes (48 in 2019) in the schedule but had a wider scope than had been available in prior years.

There were some dispensations for entries this year as some of the classes could not be achieved due to poor weather and performance by the colonies. Combs were not drawn out to the extent that they are normally. The reason for the dispensation was to ensure a variety of entries could be on display to show a full range of products from the hive.

A summary of the entries in the Honey Show were as follows:

It was a pleasure to judge the entries of those members who took the opportunity to test their ability to best present the efforts of their bees’ endeavours at the Annual Honey show. I made notes of all the classes and am happy to respond to any emails from those members who entered and wish to know how I considered their particular entry (PDBKA@BeeDavis.co.uk). I also offer the following summary of the judging process for the jarred honey classes.
Before judging started all entries were checked to make sure they were entered into the right class. This was primarily to check the colour of liquid honey entries. David and the Honey Show administrators moved those that were incorrect to their correct class. Strictly this should be the responsibility of the entrant but requires use of standardised grading glasses.
Judging progressed one class at a time and was based on gradual elimination. The first stage in checking the jarred classes was to perform an external examination of the entries as they sat on the bench. Those that failed not being considered further. Next one jar of each entry more closely examined with the aid of a torch. Then an internal examination was undertaken with the aroma when first opened being noted. Finally a check on texture/ viscosity and taste of those entries remaining was used to place the entries. If there were faults with an entry that was placed the points awarded were modified downwards accordingly. These points were used to award some of the trophies that bridge more than one class.
Finally, well done to all those who received a placing certificate and particularly well done to those who received a trophy (or two!). I would like to echo the thanks made at the end to the Honey Show administrators and David Parkinson by our President Tom Blackburn and wish David all the best as he leaves us for pastures new next season.