Asian Hornet Watch is a citizen science smartphone app which allows users to monitor sightings of the invasive Asian Hornet species. The app, developed by CEH and funded by Defra, includes information on the ecology of the Asian hornet as well as details of species that are commonly confused with it.

Watch this YouTube video to understand more.
Note, there is no audio on this walkthrough video.

1 November 2021 – Portsmouth. –  The nest was located & destroyed  within 3 and half hours – very fast! It was located by the ferries just off the M27 and about 4km the other side of the estuary from Gosport. The National Bee Unit Inspectors said “it was lucky the Asian Hornet was found in an area of parkland and space which helped with following the flight path of the Asian Hornet back to the nest.”
The National Bee Unit has asked for members of the public and all beekeepers to be extra vigilant in that area.
This is the time of the year when the Asian Hornet queens leave the nest to hibernate ready for next Spring. Beekeepers are urged to keep their Asian Hornet traps out for a while longer until the really cold weather sets in.

Confirmed UK sightings of the Asian hornet in 2020:

Confirmed UK sightings of the Asian hornet in 2019:

13 October 2019 –  a second Asian hornet nest has been destroyed in Christchurch.  Please continue to be vigilant over the next few months.  Autumn could expose further nests in trees so look up when out for a walk and encourage others to do the same.

On 7 October 2019  there was a credible sighting of an Asian hornet in The Sands, Farnham. The Farnham AHAT will be monitoring a bait station there from today. In the meantime, will everyone please watch any late nectar sources such as ivy, where the hornets could be feeding on the nectar or on other insects and set up bait stations or traps baited with a sweet liquid (jam, apple juice etc) and monitor them regularly. Any sightings please report to alert@farnhambeekeepers.org.uk if possible with a photo (these insects move very fast).

On 4 October 2019 an Asian Hornet nest was found high up in an oak tree near Christchurch in Dorset and has been destroyed.   In Christchurch surveillance is continuing. Defra says it’s continuing to receive reports of sightings and is appealing to everyone to be engaged and look for hornets on local forage sites such as ivy. It’s this time of year, when leaves are falling, that well-hidden nests suddenly become visible. Please look up when you are out and about and report any nest you see whether active or abandoned by taking a picture and sending it to alertnonnative@ceh.ac.uk.

On 9 September 2019 an Asian Hornet was found and captured in Ashford in Kent. This was the third confirmed sighting in 2019. The sighting was confirmed by the Seasonal Bee Inspector.

The Asian hornet (Vespa velutina) is a species of hornet which is not native to the UK. It is smaller than our native hornet and poses no greater risk to human health than other hornets or bees.

However, they do pose a risk to honey bees and pollinating insects. This is why we are keen to stop this insect establishing in the UK, and why you should report suspected sightings.

If you suspect you have seen an Asian hornet you should report this using the iPhone and Android app ‘Asian Hornet Watch’ or by emailing alertnonnative@ceh.ac.uk

More information can be found on the National Bee Unit website and on the Non Native Species site.

Vespa velutina, the yellow legged hornet, commonly known as the Asian hornet, is native to Asia and was confirmed for the first time in Lot-et-Garonne in the South West of France in 2004. It was thought to have been imported in a consignment of pottery from China and it quickly established and spread to many regions of France. The hornet preys on honeybees (Apis mellifera) and other pollinators and disrupts the ecological role which they provide, damaging commercial beekeeping activities. It has also altered the biodiversity in regions of France where it is established and can be a health risk to those who have allergies to hornet or wasp stings.

In 2016,  Asian hornets were discovered in the UK for the first time. Genetic analysis confirmed they were the same genetic population (Vespa velutina nigrithorax) as those which came from Eastern China to France.  Although we cannot rule out the hornet arriving directly from the same area in China, we believe this is highly unlikely.  Further discoveries were made in both 2017 & 2018, all from the same genetic source. 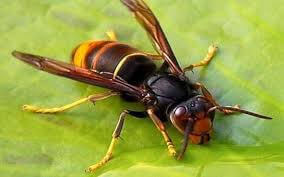 Appearance of the Asian hornet

The Asian hornet is smaller than our native hornet, with adult workers measuring from 25mm in length and queens measuring 30mm.

It’s abdomen is mostly black except for it’s fourth abdominal segment which forms a yellow band located towards the rear.

It has characteristically yellow legs and it’s face is orange with two brownish red compound eyes.

Biology of the Asian hornet

Spring – In spring the queen emerges from hibernation, seeks out a sugary food source to build up energy to commence building a small embryonic nest. During construction of this primary nest, she is alone and vulnerable but she will rapidly begin laying eggs to produce the future workforce. As the colony and nest size increases, a larger nest is either established around the embryonic nest or they relocate and build elsewhere.

Summer –  A single colony, produces an average of 6000 individuals in one season and from July to the end of November the Asian hornet may predate on honeybee colonies.  Asian hornets can be seen hovering outside a hive entrance, waiting for returning foragers. This is the characteristic “hawking” behaviour. When they catch a returning bee, they will take it away and feed off of the protein rich thorax; the brood requires animal proteins which are transformed into flesh pellets and then offered to the larvae.

Autumn – During autumn, the nest’s priorities shift from foraging and nest expansion to producing on average 350 potential queens and male hornets.  Only a small number of these potential queens will successfully mate and make it through winter. After mating the newly fertilised queens will leave the nest and find somewhere suitable to hibernate over winter.  The old queen will die, leaving the nest to dwindle and die.